The last few months have been pretty intense, but we finally finished moving ~18000 mailboxes from Lotus Notes to Office 365. I went to the first startup meeting for the implementation part of the project in late September, and we finished most of the migration this week, which was pretty satisfying to say the least 🙂

It has been a long journey (done in a short timeframe), and a lot of things needed to be done in order for it to work.

Some of the obstacles we (and probably everyone who does a migration) needed to solve were:

Since a lot of people out there are probably doing, or will be doing, the same thing we did, I will try to do a couple of post on how we solved these tasks (at least those related to powershell), share some code and good cmdlets for managing everything from rooms to mobile devices,

During our migration to Office 365, we first needed to make sure all the users had an account in Active Directory. In our case, a lot of them didn’t since they only used Notes-applications.

The provisioning/sync of these accounts is for another blog post (or several), but I thought I could share some of the code we use for setting passwords.

First of all, you need something to generate the passwords with. There are a lot of scripts written for this (a good blog post that helped me getting started is this one), but most of them I found are using the same process for creating the passwords.

This will generate a random upper case letter between A and Z. If you change the range you can generate any character you want using this method. If you would like some help in finding which character is corresponding to what number you can have a look here.

So I ended up with doing my own function for this. It’s pretty short so I’ll do a code walkthrough of the important parts in it.

First, we need to specify what characters must be included in the password. I did this by creating four different arrays. You might want to have some control of which special characters are included since some applications (if the password is not for Active Directory accounts) can’t handle some of them. And you might not want your users to have to change their keyboard layout to be able to log in 🙂

It is now time to actually build a password. I did this with a loop which will execute until it reaches $PasswordLength, which is a parameter for the function.

$CharacterString now contains all the characters we need. But we don’t want the passwords to always have the character types in the same order (first a capital letter, then a small, then a number then a special character, and then random) since that would make the password a lot weaker.

To fix this we turn it into an array and then randomize the order of the characters, and finally send it back to the pipeline.

This password will always contain all the character types we have specified. And they will always be random.

The complete code (which includes the $NrOfCharacterTypes and some other things), are available here.

There are obviously a lot of things that needs to be migrated when changing mail platform, one of those things that are a “very nice to have” is user pictures/thumbnails which shows up in Outlook, OWA, Lync and so on…

But this can be quite a challenge. The pictures are stored in the “ThumbnailPhoto”-attribute as a byte array, which needs the picture size to be less than 10 kb to work in lync/outlook (actually, the “Active Directory Users & Computers”-snapin wants it under 8 kb to be shown in the attribute editor so this is what we choose).

The pictures from Notes are “user generated”, they can be gif, jpg, png, bmp or something else, and I’m guessing this would be the case for many large organisations out there.

The solution we used was to add a step in our “Notes to Active Directory”-script to check if a picture is available, if it is, it uses a small “advanced function” I wrote to convert the picture to a byte array, and save a copy of the new file on disk, it’s called ConvertTo-ADThumbnail. It also output’s the changes in size if that’s needed.

To actually write the “ThumbnailByteArray” to the user object you do something like this:

The cmdlet handles most picture formats, and shrinks them until they are small enough. You can set the file size, output folder path etc. with parameters.

If you missed the link above, the code is available here.

During our migration to Office 365, we ran into an issue with creating Master Lists for the migration tool. The tool just creates one huge file with all of the users in it, but we want to migrate them based on different things like mailbox size, where in the organisation they are and so on.

When we have the users we want to migrate in a list, we need to split that list up for scaleability reasons (multiple migration tool servers), and since the files need to be formatted in a quite specific way, this was becoming a pain…

What better way to fix this problem than with a PowerShell form?

I opened up Sapien PowerShell Studio 2012 and started working. Here are the results: 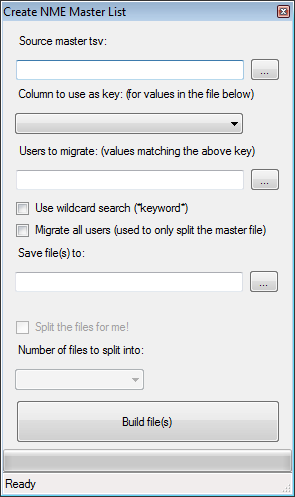 Just browse for the master tsv file, the columns found in the file will be automatically populated in the droplist. Choose which one you want to do the matching on (in our case targetaddress, same as e-mail/UPN): 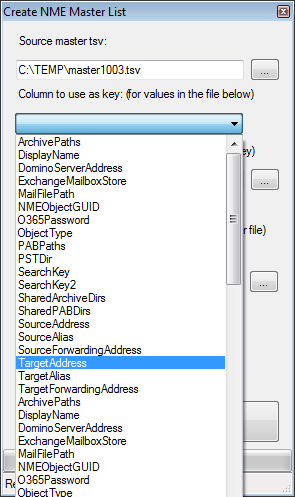 Select the other settings, should be pretty obvious: 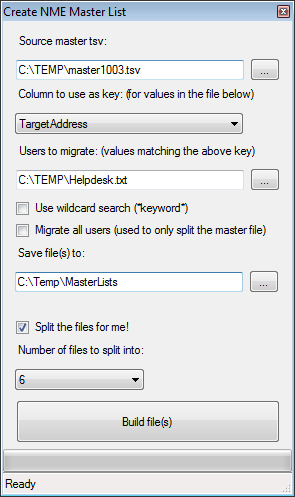 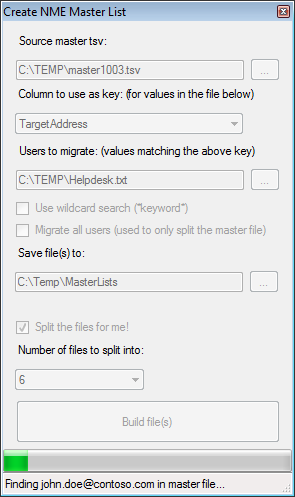 If you just want to split the master file, that’s possible aswell, just tick that box and hit the Build-button: 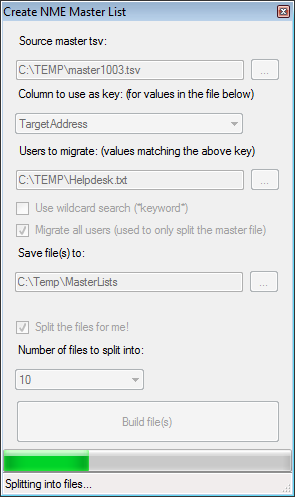 I hope someone else might have use of this little form!

The code is available here and it requires at least PowerShell v3 to run properly.